The NTLM relay feature of Impacket’s ntlmrelayx.py used to offer only two servers, HTTP and SMB, for incoming NTLM authenticated connections using those two protocols. Which can then be relayed to more protocols: HTTP, SMB, LDAP, SMTP, etc. I had a situation where the incoming NTLM authenticated connection used ADWS (built upon NetTcpBinding WCF) so I implemented this new server protocol in Impacket 😉

How to use this new feature in a AD domain environment?

1. Run this on pentester machine:

2. Simulate a vulnerable client by running this PowerShell command on a domain member while being authenticated as a user who has admin rights over

3. You should notice the creation of the c:\test file on the

Here is a successful result on pentester-side (PYTHONPATH because I run Impacket from source):

I was pentesting a webapp which called PowerShell scripts using the ActiveDirectory module. One of the API calls took as parameter the domain controller FQDN/IP so I passed my IP and in Wireshark I saw an incoming TCP connection on port 9389. This port is used by ADWS! It means that my domain controller parameter was passed to the -Server parameter of one of the cmdlets.

I created a TCP relay with socat which allowed me to relay the traffic on the network level to a domain controller and observe the traffic in Wireshark: 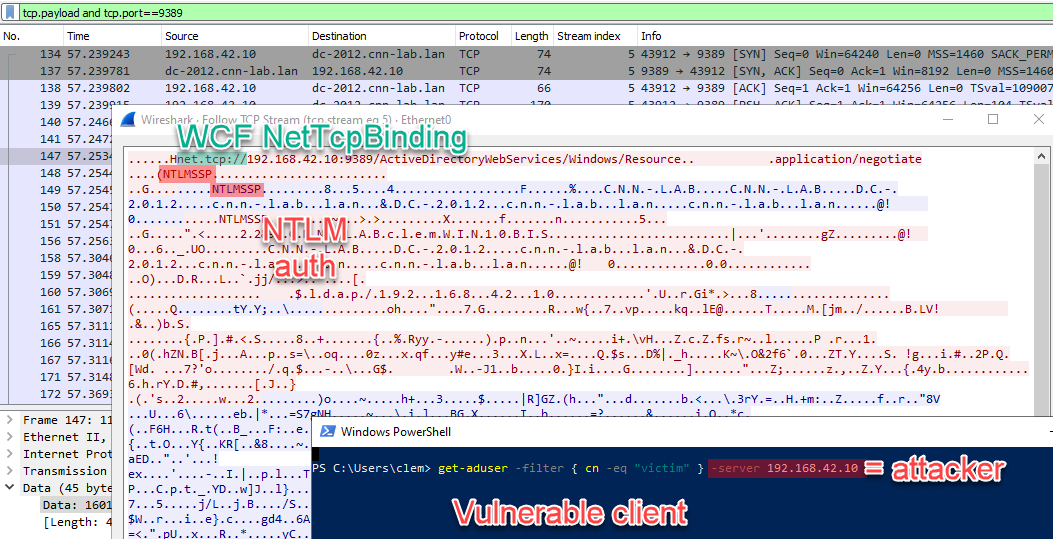 I explicitly used an IP instead of a FQDN for -Server to make sure that NTLM would be preferred to Kerberos.

So, I could get an incoming NTLM authentication therefore it could be NTLM-relayed! 🏆 If only I had a ADWS server in Impacket, which was not the case yet… 😥

Before going further, here is how the Impacket NTLM-relay feature implementation is organized. Hats off to Dirk-jan Mollema (@_dirkjan) and Alberto Solino (@agsolino) for this modular design!

ADWS means Active Directory Web Services and is offered by domain controllers to interact with the domain instead of using more traditional protocols such as LDAP or RPC. The official PowerShell ActiveDirectory module notably uses it. You can learn more about ADWS and how to use it as programmer.

⚠️ The “Web Services” part of its name is misleading as it does not use HTTP at all since it is built upon WCF.

WCF is “a unified programming model for building service-oriented applications” especially popular in .NET applications. ADWS uses specifically its NetTcpBinding (Net.TCP Binding) implementation. You can notice it when the “net.tcp://” scheme is used in URLs (and appears in clear at the beginning of the trafic). It is a binary protocol which is not yet widely supported by tools and libraries outside of .NET. And I had to implement enough of it in Python to complete the NTLM challenge-response… 😬

If we continue to dig (are you still following me?), it is built on two protocols published by Microsoft:

Since then, Uli H (@Pizza_4u) very kindly implemented it in Wireshark so we can finally easily analyze this traffic!

Three years after starting an implementation support for .NET Message Framing Protocol (MC-NMF) and MS-NNS has finally landed in @WiresharkNews. Will be available with upcoming 3.4 release. :-) Thanks @cnotin for sharing a capture file. https://t.co/bxckJiTJox pic.twitter.com/ydHp5x1IZ6

It isn’t applied automatically, so right-click on the traffic -> Decode As… In the window ensure that “TCP port” and “9389” are selected then in the right-hand side “Current” column, select “MC-NMF”. Apply with “OK” and it will look better (no need to search for MS-NNS, it will appear automatically)

I also found the Pentesting Webservices with Net.TCP Binding article by Timo (@bluec0re) who shared very useful Python code which inspired a lot my implementation:

NTLM Relaying can mitigated in several ways. We can distinguish between recommendations that can be applied on either sides.

The main resulting code is available in wcfrelayserver.py shared through PR #944 now merged. I hope you will like it 😉

I only used ADWS in my tests and in the examples above, but this implementation should work with any WCF / Net.TCP Binding vulnerable client.