Story of how I discovered a DLL planting vulnerability in IBM Tivoli Monitoring, due to dangerous default folder permissions. Including PoC steps.

The default file folder permissions on ITM windows installation allow for non-privileged access which could allow for exploits such as dll planting.

IBM Tivoli Monitoring is installed in C:\IBM\ITM with dangerous permissions as non-privileged users are allowed to “create files / write data” and “create folders / append data” in the folder. 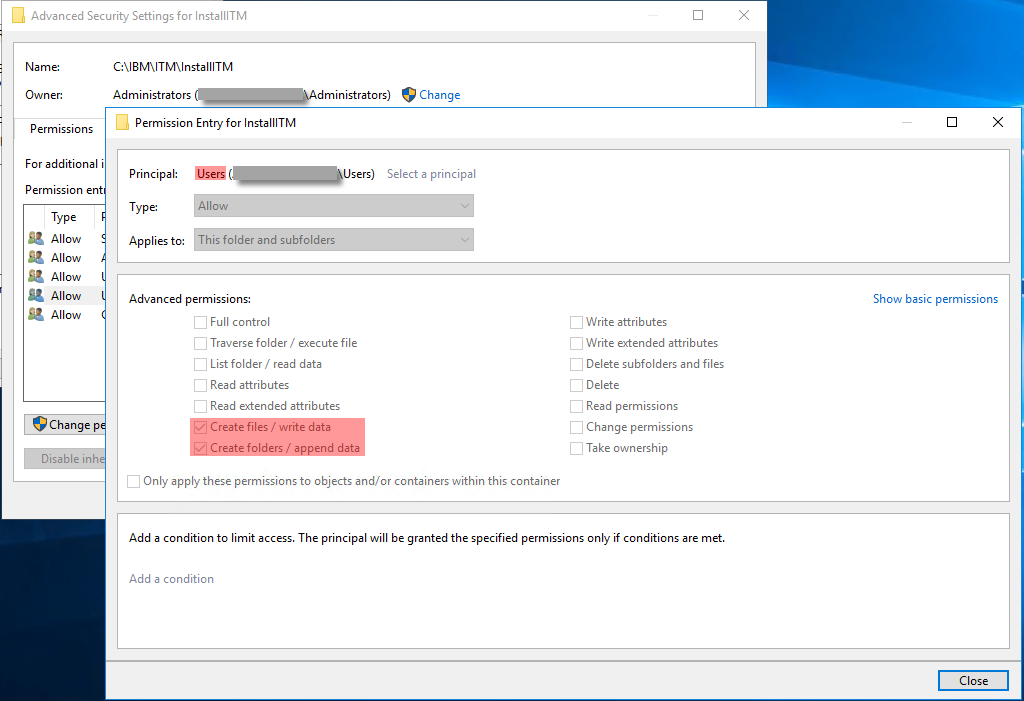 I believe these are standard permissions after installation.

With these permissions, an unprivileged user cannot directly modify existing files. However, they can create new files. Using SysInternals ProcMon I noticed that several IBM Tivoli Monitoring services (e.g. KinCInfo.exe launched by k51agent.exe or k53agent.exe), running as NT AUTHORITY\SYSTEM, try to load non-existing DLL from folders under C:\IBM\ITM. As we showed, unprivileged users have the rights to create these missing DLLs (“DLL planting”) that will thus be executed in privileged context.
In this example, while running as an unprivileged user, I planted the nlslibLOC.dll file in C:\IBM\ITM\InstallITM\ folder:

After a service restart (easily triggered by a system reboot for example, but I did not search for any alternative), we get a calc.exe process running as SYSTEM, under KinCInfo.exe, thus proving that privileged command execution was achieved:

In my original PoC I also showed that we could create a new user.

Access Vector Required for Exploitation?
Local access. Eventually remote, if obtaining an unprivileged access through the exploitation of a remote vulnerability in an unprivileged service running on the monitored server (but unrelated to Tivoli).

Vulnerability Exists in Default Configuration?
Yes, I think so

Under what privileges does the vulnerable service or component run?
NT AUTHORITY\SYSTEM (high privileges)